World champion Bruce McBarnette reports that he raised his own American record in the M50 high jump in mid-June at a Virginia all-comers meet. In a press release sent yesterday, he says he cleared 1.92 meters (6-3 1/2) at Major J. Wells track at Falls Church High School -- his ninth M50 record. Current forecasts show a 40 percent chance of thunderstorms Friday, when Bruce and the other M50s jump at 11 a.m. But my experience is that rains, if they come, generally dodge nationals. (The Geezer Gods intercede.) Thunderstorms at 2007 Orono and 2008 Spokane nationals came at night and merely cooled us off. So let's hope the same holds for Oshkosh. Meantime, kudos to Bruce. Keep chipping away at that German's world record of 1.98 (6-6)! 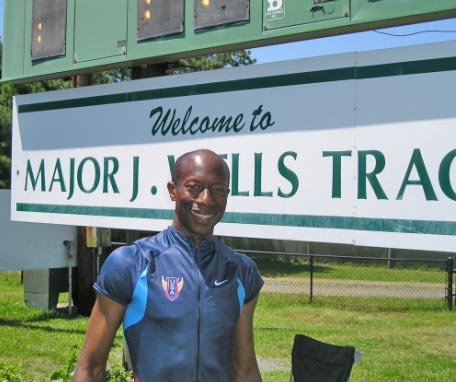 Bruce poses at site of his 1.92 jump, his latest M50 American record.